YOU GUYS, CHICKENS ARE A PAIN IN MY, well you know. This city girl had no idea of what I was getting into. I knew it would be work because they are living things, but this much work, wowzer!

So our first batch of 12 girls were fun, fluffy and cute. They were also very friendly. Then they were killed and a HARD lesson was learned. Next we had to make Coop Knox, and raise the new group of ladies, they are not as friendly and more skiddish. Coop knox was done and all 23 girls were moved and happy. By fall they had eaten all the grass and flowers in the coop, but we supplemented with stuff from the garden and grass clippings. They starting laying eggs and life was good.

Insert this winter. The polar vortex was brutal and the rest of the winter with all the cold and wind was not helpful either. We added plastic around the outside of the run to keep them warmer. Those really brutally cold days our girls ended up inside a room in the barn. An area that was filled with straw, quickly made but nice nesting boxes, heat lights, and plenty of walking and perching spots. That kept them warmer and they made it through all the CRAZY coldness. 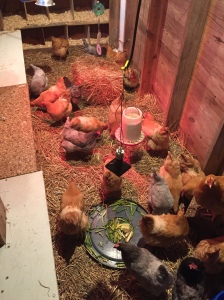 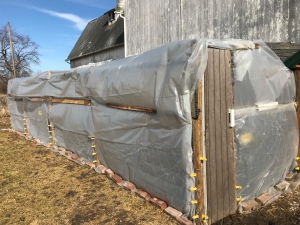 However during the cold/snowy days our girls got a little, what we will call, unfriendly with each other. Feathers have been pulled out to create a bald spot and some of our mamas even needed time away from the flock to heal. One mama has a wound on her back that I don’t think will ever fill in. The others were actually pecking a hole into her. (this city girl did not sign up for that, ew) She is currently happy and healing well in my garage, she has been going into the backyard when its nice out. I don’t know what we are going to do with her, as she cannot stay here long-term but I worry about her returning to the flock. 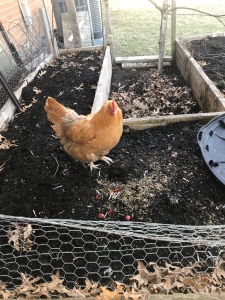 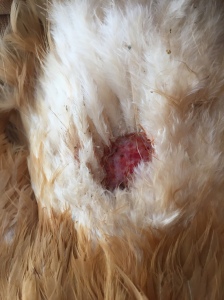 Then someone in the flock has taken it upon herself to eat an egg whenever she feels like a snack…yuck! Did you know they will eat their own eggs?!? I had NO idea, and once they start it is really hard to get them to stop. Fun stuff. 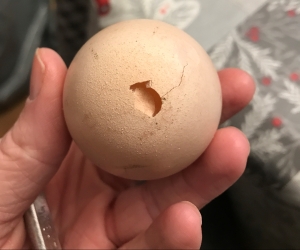 I ended up doing some research to figure out what to do to try to keep them busy so they would be nice to each other. So we have added entertainment, extra protein, and anything we could think of to keep them from going after one another.

We added CDs hung from strings and mirrors for entertainment, Chickens LOVE to look at themselves, crazy I know. The moment the mirror was put up we had ladies just staring at themselves. 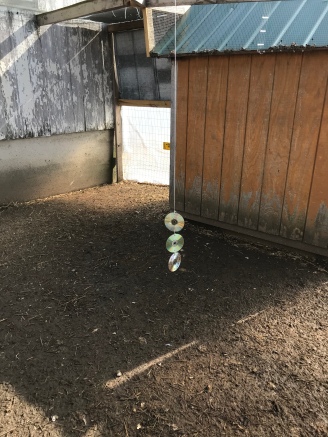 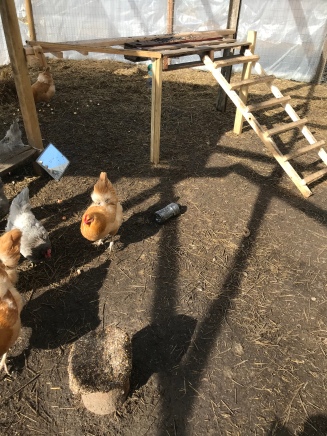 We also took plastic drink bottles and drilled holes in them, then we filled the bottles with seeds so they have to roll the bottles to get more seeds. Again anything to keep them busy. They can empty the bottles in like a day. We have 2 so far, I think I will keep saving them and fill like 6 at a time and only give them 2 a day so I have some ready for the next day. These bottles look gross but they are filled with seeds which makes the girls happy. 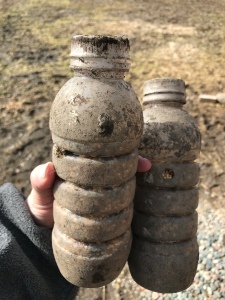 My very handy hubby added platforms and a ramp for them to climb and perch on. We also had to move their food and water out of the coop because chickens never stop eating. By having it outside we have gone through less feed, plus it decreased the moisture inside the coop, which is important so the girls don’t get frostbite. 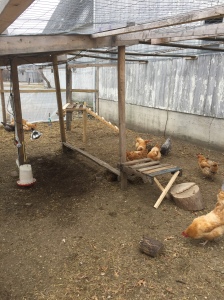 In the fall when they had eaten all the grass they made themselves a dust bath, which is how they get clean. Well with the ground frozen they were not able to get clean. So Hubby took over wood ash, sand, and dry dirt to fill in the hole where they were doing their dust baths. They were very happy to have that available again. 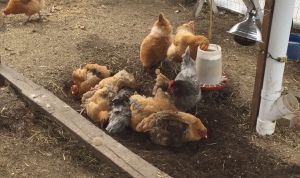 These girls are high maintainance, to a level I NEVER thought a chicken could be. They do provide eggs, which I am thankful for. More additions will be made to coop knox come planting time and that means another post. To be fair chickens are not all problems they provide us with eggs and entertainment, we have ended up calling them dinosaurs. Our pup hero is interested and terrified at the same time. A couple of the girls have pecked him and now he stays a distance away, but he still wants to know what is going on. I hung up on my son when a chicken tried to fly out of my arms while my hubby was driving us home in the truck, NOT and experience or story I ever thought I would have in my life. 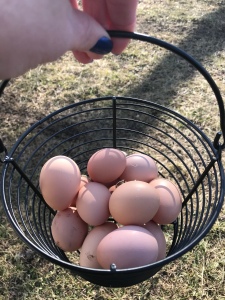 So between all the additions to the run, changes in set up, moving the girls to and from the barn, doctoring the injured girls, and changes in the works they have kept me, hubby and our neighbors on our toes! I am still learning and to be honest I wouldn’t change it,  but dang now I know how guys feel when they say a girl is high maintenance. hehehe!